Last week, a woman I used to work with announced she is having her third baby.  During the same week, a different friend, a girl I went to high school with almost fifteen years ago, got married in a seaside ceremony in France.  Three of my friends got new jobs, two made tenure, and four sold their books.  It was a week of good news delivered via Facebook.  Meanwhile, at my house, nothing great happened, nothing at all.   And suddenly, for no good reason whatsoever, everything about my accomplishments and my life seemed dull by comparison. 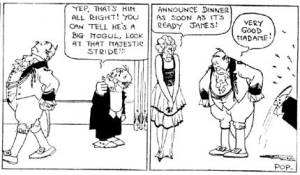 The idea of “Keeping up with The Jonseses,” a seemingly perfect family acting as a benchmark for the rest of society, is hardly new.  In fact, the saying is believed to have originated from Arthur R. “Pop” Momand’s comic strip, “Keeping up with The Jonseses,” which he created in 1916.  But for the better part of the 20th century, including during my childhood in the 80’s and 90’s, The Jonseses were singular, limited to one or two families in your lifetime.  Now, thanks to social media, the Jonseses are everywhere.  Their perfect lives are splashed across my computer screen every day.  And they’ve multiplied.  Now there are a hundred Jonseses.  And this is why I have decided to leave Facebook.

I’m just going to say the thing you’re not supposed to say: Facebook makes me feel shitty about my own life.  And I have a good life, believe me.  In my early twenties I was married to the wrong man, thought to be infertile, and stuck in a dead-end job.  Fifteen years later, I am happily remarried, the mother to two beautiful twin girls, and have embarked on the career of my dreams.   Yet, like anyone, there is a small bag of regrets I keep tucked away in the back of my closet.  I’ve never lived in an exciting city, and never traveled much.  I can’t seem to finish the book I’ve been writing for five years, and I can’t find a full-time job in my field because I chose an MFA over a PhD.  I will never have another baby because I made my husband get a vasectomy after our twins were born, and I never had a honeymoon because I was four months pregnant with my girls on our wedding day.

These are small regrets, and it bears saying that I wouldn’t trade anything that I have to make those unrealized dreams come true, yet, Facebook seems to exasperate the discontentment I feel over these incomplete parts of my life.  And I’m embarrassed to say that I often find myself swelling with envy when I see my writer friends selling books (which they deserve because they have worked very hard, but still….), having new babies, travelling to beautiful far-off lands, living in the cities I wished I lived in, or losing the weight I wish I never found in the first place.   Seeing my unrealized dreams realized by others day after day is enough to break anyone’s spirit.  I’m in a great relationship right now, thankfully, I can’t imagine what this feels like for people who are unhappily coupled.  I have no doubt that If Facebook had existed while I was married to my first husband, I would have driven off a cliff.

And the blame is not on Facebook, or my friends who are basking in the glow of their wonderful lives, it’s squarely on me.  I’m an oversharer, a social media junkie with over 700 friends-most of whom I had never met.  So, I’m going to change some things.  I’m going to purge my friend list (more on this later), and work on using Facebook for the good that it brings to my life: connecting through my author page with people who like my writing, connecting with family members and close friends, and reading great writing from my literary friends.

For more on Facebook envy, read this article from HuffPo.  Or this great piece by Sonya Huber about being a writer and feeling, well, inadequate.

Would it be completely hypocritical of me to suggest you follow me on Twitter?  Don’t answer that.